I am a Hockey Player 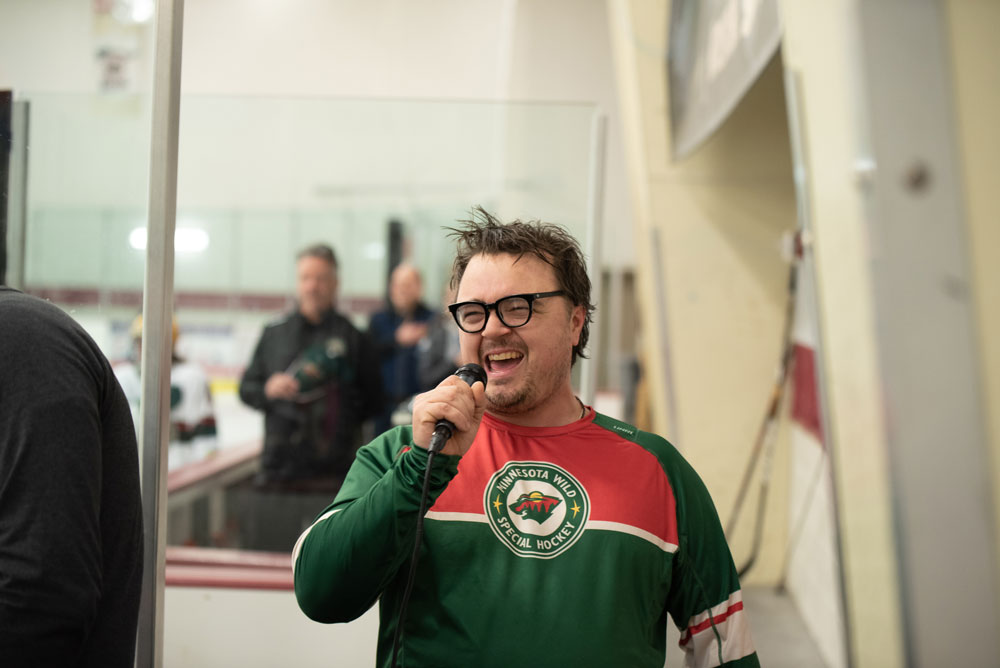 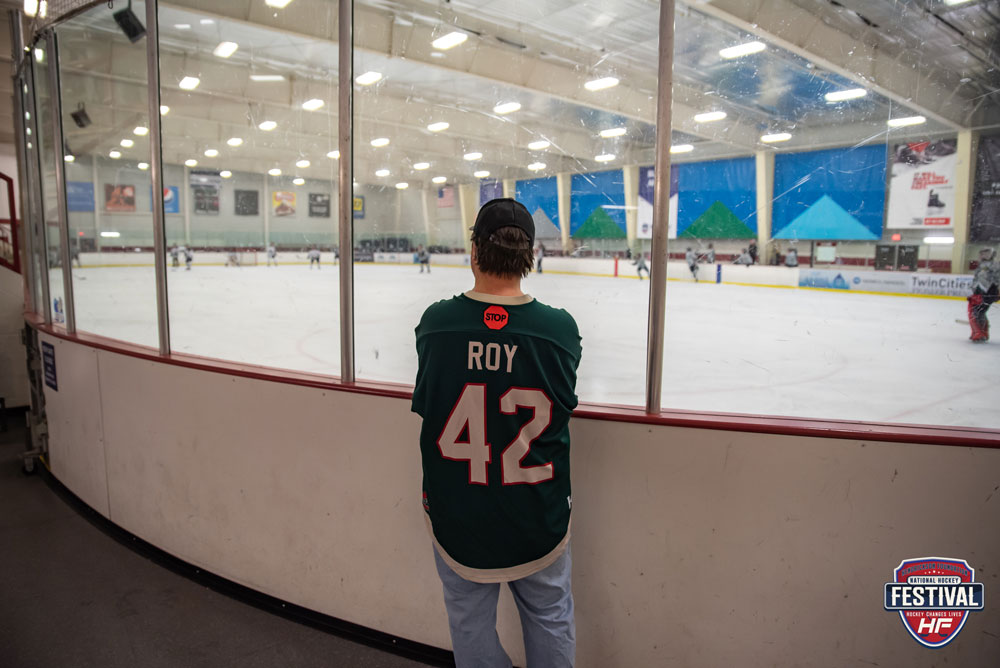 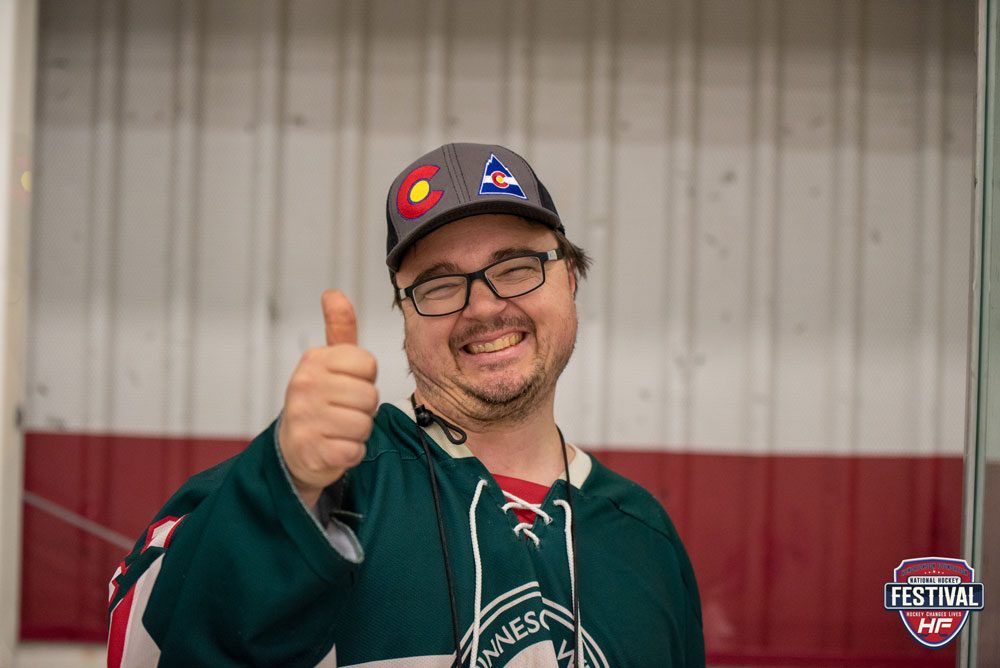 Q: What do you love most about hockey?

A: Great coaches, camaraderie, having fun, good exercise and a good workout!

Q: What is your best hockey memory?

A: Wow, I think there is a lot but if I have to choose, I’d say getting a hat trick during a game against Alexandria in 2019. Second best memory would be meeting Darby!

Q: If you could travel anywhere in the world, where would you go and why?

A: Anywhere in the world, I would go to Japan because great culture and good toys! In the US I’d say Lake Placid, New York so that one day, or hopefully someday I could play at the same rink where the 1980 mens hockey team won the gold medal.

Q: What do your teammates mean to you?

A: They mean a lot to me. They are caring, energetic and funny and like me they like to have fun!

Q: What would you miss most if you couldn’t play hockey?

A: Coaches, teammates, going to different places and seeing you guys at HF.

Q: Tell us something about yourself that others may not know

A: I sing and I have been practicing and playing the guitar for almost 7 years.

Q: What do you do to stay busy during the off season?

A: Going for walks and watching wrestling DVDs so that I can donate them eventually. And of course seeing my dog – he’s a dachshund and he’s a year old. 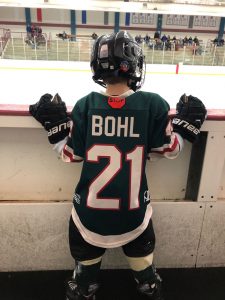 Q: What do you love about playing hockey?
A: My cellies! (Dad’s translation: Celebrating my goals)

Q: What is your best hockey memory?
A: Goooo Gophers! (Dad’s translation: Attending Gopher hockey games and even skating at one game this year!)

Q: What does hockey mean to you?
A: The big ice, sticks, pucks, it’s all fun!

Q: What do you teammates mean to you?
A: They help me work hard at games.

Q: What would you miss most if you couldn’t play hockey?
A: I would miss wearing my cool equipment and jerseys.

Q: Tell us something about yourself that others may not know.
A: I love playing and wrestling with my brothers Hudson and Easton and skating at St. Louis Park’s donut hockey practices every Friday morning. 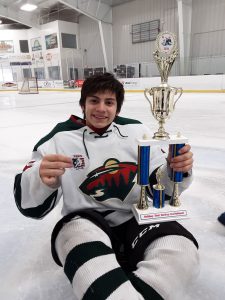 Q: What do you love about playing hockey?
A: The thing I love most about hockey is meeting new people all the time and being able to be part of a team.

Q: What does hockey mean to you?
A: Hockey means leaving behind stress. I get to forget about having cerebral palsy for awhile, and just be a hockey player. I honestly don’t know where I would be without it.

Q: Tell us something about yourself that others may not know.
A: A couple of things people might not know about me. I’m really good at impressions and I can sing like Luis Armstrong. 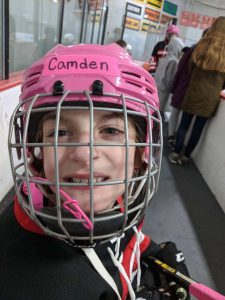 Q: What do you love about playing hockey?
A: I love being a part of a hockey team.

Q: What is your best hockey memory?
A: Learning how to skate, and skating on the outdoor rink with my family.

Q: What does hockey mean to you?
A: Having fun and scoring goals

Q: What do you teammates mean to you?
A: Friendships

Q: What would you miss most if you couldn’t play hockey?
A: Because I couldn’t skate around anymore with my team. 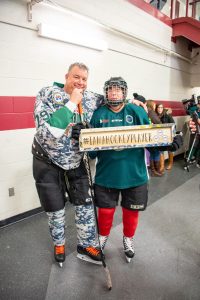 Q: What I love most about playing hockey?
Tim: Scoring goals and getting assists. It’s a lot of fun to make a pass that splits the defense and frees your teammate to go in and beat the other team’s goalie.
Sandy: I love learning how to skate and learning the basics of the game of hockey.

Q: What is your best hockey memory?
Tim: From scoring in Fergus Falls, to being nick named Timber or skating in famous rinks around the state, while great memories, nothing compares as to creating memories for fellow Veterans by developing new teams around the country and then going to play them. I also love to build opportunities for players to play memorable games, be it the Warrior Showcase, Hockey Day Minnesota or playing in the Hendrickson Festival.
Sandy: My best memory is at the MN Blind Summit in August of this year. It was amazing to be a part of a team and also to be a volunteer to help with the event.

Q: What do you teammates mean to you?
Tim: My teammates mean the world to me. They have my back and support me both on and off the ice. I truly believe the Warriors have the best locker room of any sport.
Sandy: My teammates are my inspiration since everyone has challenges they face but they have the most positive attitude. Everyone encourages each other.

Q: What would you miss most if you couldn’t play hockey?
Tim: That’s hard to say. Six years ago I got involved with the Warriors and their growth both locally and nationally has been my primary focus in life. Chris Price, our former president, set a goal of a team in every state and I have to say we are about half way there! With out hockey or the Warriors I’d have to fill a big void in my life.
Sandy: I can’t imagine what it would be like without hockey or my teammates.

Q: Tell us something about yourself that others may not know.
Tim: Tim Loney served over thirty years in the US Army Reserves. He was mobilized three times and deployed twice in his career to Cuba and to Iraq. Prior to joining the Warriors he had not skated on a team since playing intermural Hockey for Army ROTC at the U of M. During the week he is an Outside Sales Representative for Sunbelt Rentals and is their Minnesota District Ambassador for the Gary Sinise Foundation.
Sandy: I love to plan “fun” events for my co-workers because too much fun is never enough! “Soup-er-bowl, “Talk Like a Pirate Day,” holiday luncheons and Retirement parties are enjoyed by many. In July, I celebrated 40 years of service with the State of Minnesota. 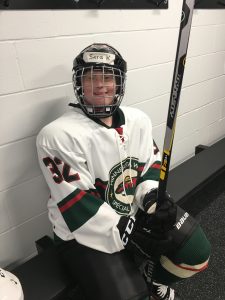 Q: What I love most about playing hockey?
A: Hockey is fun. I love hockey. My room at home is full of hockey stuff. I even have a full size Ryan Suter!

Q: What is your best hockey memory?
A: I love to shoot and score and having friends and family come watch me

Q: What do you teammates mean to you?
A: I really like my teammates. They help me on the ice. They are real nice to me.

Q: What would you miss most if you couldn’t play hockey?
A: I would miss everything about hockey, my teammates my coaches, traveling and tournaments

Q: Tell us something about yourself that others may not know.
A: I love to travel I love to play guitar and sing. I’m a good aunt to my nephews. I love lots of sports. I want to meet Ryan Suter! 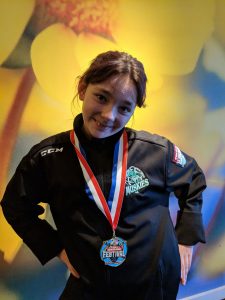 Q: What I love most about playing hockey?
A: Making new friends.

Q: What does hockey mean to you?
A: Hockey is an extension of my family and I think of every player as family.

Q: What is your best hockey memory?
A: Winning the 2019 MN Special Hockey Disabled Athlete of the Year!

Q: What do you teammates mean to you?
A: I feel like they are my siblings.

Q: What would it be like without hockey?
A: I would be sad, as I would miss my teammates and family. 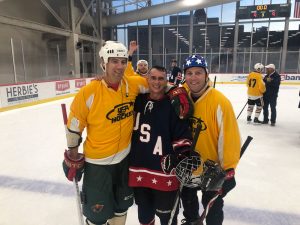 Q: What I love most about playing hockey?
A: I love spending time with people that are passionate about the game and being able to connect with people on a level only hockey players understand.

Q: What does hockey mean to you?
A: Hockey is life! Hockey gives me hope, it’s a place I know I belong, and it’s my family.

Q: What is your best hockey memory?
A: This years Summit Team USA against the celebrities I was able to play against Danny and Darby Hendrickson. Darby Hendrickson and me got into a play fight on the ice (Spartan love).

Q: What do you teammates mean to you?
A: My teammates are my family that I get to play hockey with! They’re the ones that show me what it’s like to have a family and belong.

Q: What would it be like without hockey?
A: When I lost my sight I thought I lost hockey forever I tried to find other things to fill the void but nothing worked nothing is like hockey or your teammates. I’m so thankful for MN giving everyone a chance to play. 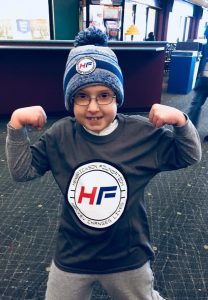 Q: What I love most about playing hockey?
A: Having a sport that I can play no matter what my disability.

Q: What does hockey mean to you?
A: Mostly friends and having fun. Mom says-hockey is where Evan can be himself and no one judges, he can be EVAN🤗.

Q: What do you teammates mean to you?
A: FRIENDS! They encourage me and cheer me on!

Q: What would it be like without hockey?
A: I wouldn’t be able to play hockey. I would have no friends that understand my disability.

Are you a hockey player who wants to share your story?